Last month, during Sacramento Specialty Coffee Week, Pachamama’s own Maksym Khaliziev participated in the 2nd annual Battle of the Brews – a competition that pairs local baristas with area bartenders and tasks them with using coffee to put a caffeinated twist on some classic cocktails.

For this year’s competition, Max teamed up with bartender Fernando Oliva of Bottle & Barlow (a co-host of the event, along with Temple Coffee and Cutwater Spirits) to create the winning cocktail: El Corojo. The drink fuses together elements of an Old Fashioned, a digestif, and a classic cup of coffee: Barrel Aged Gin, Licor 43, and Old Fashioned Bitters were combined with Pachamama’s Farmer’s Extra Dark roast to create the unique cup. “[The] specialty coffee [industry] right now is big on medium and light roasts, but this type of drink allowed me to use a darker roast,” Max explains. “I had planned to use Farmer’s since last year for two reasons: it has a smoky flavor, due to the Italian roast, and because of the Papua New Guinea beans that are part of the blend. Because of that, it has a cigar flavor and nice bitter dark chocolate notes.” One need not look further than the name of the drink to understand the importance of descriptions such as ‘smoky’ and ‘cigar’: Corojo is the name of a particular and rare type of tobacco leaf. 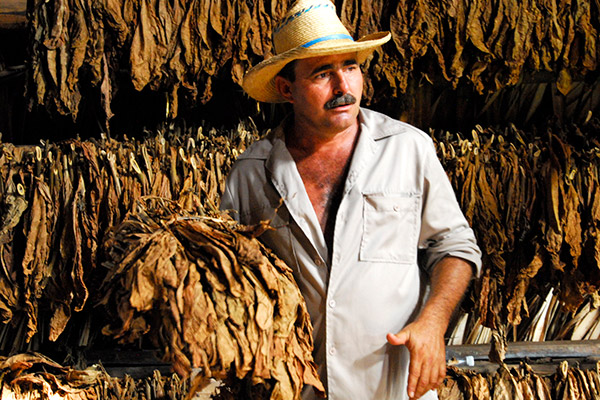 A tobacco farmer in Cuba stands with dried tobacco leaves.

“It’s the leaf that covers the cigar in the end, the most expensive leaf. It used to be grown in Cuba, but many of their Corojo crops died and now they are only grown in Nicaragua and Kentucky in the U.S.” says Max, who stumbled upon the name serendipitously after he and Fernando decided that the original name might not fly. “The first name we chose was a dirty word in Spanish, so I had to find something that sounds similar. The first word I found, El Corojo, was actually a miracle.” The drink was designed to elicit the tasting notes of a fine cigar: Farmer’s Extra Dark brought in the smoky bite and the heavy body, while the Barrel Aged Gin and Licor 43 lent themselves to the sweet fruit and vanilla flavors that one might look for in a cigar. And it just so happened that the perfect name showed itself after all of these flavors had been conjured.

Fernando gets the perfect pour.

This was not the first time Max, who was formerly a bartender in his home country of Ukraine, has combined the two worlds. He was also a competitor in the first Battle of the Brews in 2016. “Last year’s drink was called ‘Waking Up in Ethiopia’ ,” Maks explains, “It was London Style Dry Gin, Montenegro Bitters, Yirgacheffe Gedeb coffee, and we topped it with shaken egg whites, fresh rosemary, fresh ground ginger, black pepper and cardamom.” Waking Up in Ethiopia, unfortunately, did not place in the 2016 competition. That has not shaken anyone’s enthusiasm for the drink, however. “Waking Up in Ethiopia is a great example of the fact that we are starting to move past the commodification of alcohol and coffee,” expresses Cruz Conrad, Pachamama’s Cafe Manager. “As we start exploring both things at a base level and improving upon them from the ground up, we can have more opportunities to combine the two.” This leads one to ask the question: just what is it about coffee and cocktails that make them such a perfect pair? “The coffee in cocktails always plays the role of connection: coffee builds a connection between different types of alcohol, different types of spices in a cocktail,” says Max. In both instances, Max made the active decision to use fresh, hot coffee instead of cold brew or chilled coffee. “The flavor of the alcohol is the same, but it’s smoother because the coffee evaporates the initial, intense elements of the alcohol.” In fact, the temperature of the coffee is one of the major reasons that El Corojo stood out at Battle of the Brews. “We served it room temperature,” Max points out. “Everyone else blended them or shook them in a shaker with ice. We used less ice so it wouldn’t be watery, which would make it lose taste and smell, and the warm coffee combined all of the alcohol and infused all of their individual smells, which allowed for the clearest notes of the alcohol aroma to come through.” To be sure, coffee-forward spirits are not entirely new. But perhaps the time has come to more earnestly explore and innovate the world of coffee mixed drinks, and for coffee to play a more dominant role. Like in Waking Up In Ethiopia, which capitalized on the bright, floral tones of the light roast Yirgacheffe brew to complement the rooty, herbal body of the gin and the spicy flavors of the Montenegro Bitters and the garnish. One cannot argue that this would be a welcome change to the world of coffee cocktails that is currently under the thumb of old favorites like Irish Coffee and Espresso Martinis. 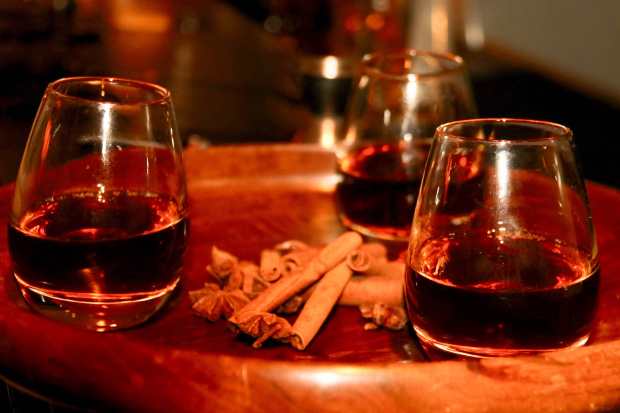 The finished El Corojo shown with a cinnamon garnish.

“Bartenders and baristas are people that have the same type of patience – I think there is no difference,” says Max, “Bartenders want to open up a bottle of liquor and serve it in a special way to a customer. For a barista, it is the same thing but with a cup of coffee.” That is why there is a proliferation of bars opening up that also are right on the money with their specialty coffee offerings, serving pour-overs, Chemex, and Aeropresses. “So the bartenders become baristas and the baristas become bartenders,” says Max. And these hybrid drink artists can use the singular nature of a cup of freshly brewed coffee, which cannot be exactly replicated, to create cocktails that are unique in each iteration, no matter how many times the same ingredients are used. So keep your eyes peeled for innovations at your local bars that may rival Waking Up in Ethiopia or El Corojo, and you may just be ahead of the curve.